Written at Oakwood Cemetery, Raleigh, 11 Nov. 2009
I was only 36, beginning a second graduate program—clearly, I was far from complete.  We who continually reinvent ourselves retain the illusion of eternal becoming far longer than those respectable adults with 2½ children and a mortgage and a picket fence.  Perhaps.  I’m never quite sure of anything.  Just a month or so previous to that day, I had stood enrapt in the American literature aisle at the Intimate Book Shop, inspired a big gulp of air, and decided, “I want to be an English teacher when I grow up.”

So there I sat in a class on Lawrence and Joyce, reading The Rainbow, in the process of becoming once again.  Dr. Weldon Thornton, the same age as Tom Brangwen at the time, was lecturing on the amazing prescience of Lawrence, who, at 23, understood that the past-middle-aged Tom would still feel incomplete.  I think that was the word.  Not whole, anyway, not an adult, not fully grown and responsible, still becoming.

And now I’m 56 myself.  I couldn’t look up the passage in The Rainbow to find out Tom Brangwen’s exact age nor the exact word that Lawrence put into his head because my books are still half packed in boxes in the cramped studio apartment that I share with the current next man who is supposed to make me whole.

Well.  He’s helping, anyway, insisting that I embark on reinvention number four so that I can be a paralegal when I grow up, because I delight in the legalistic perfection of the mot juste. 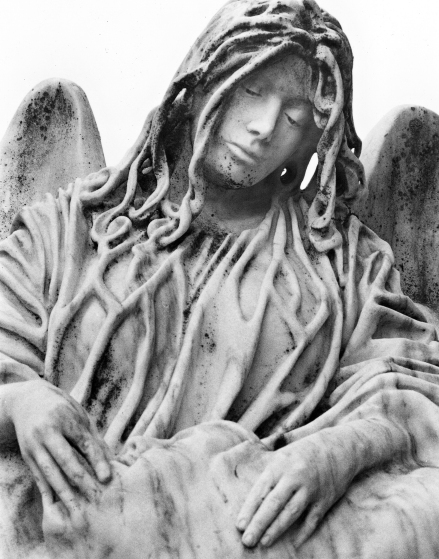 It’s autumn in North Carolina, something else I delight in.  I’m sitting on a bench at Oakwood Cemetery in Raleigh as I write, glancing up when the shadow of a bird flits across the page or a falling leaf glides onto my lap.  Mostly, though, when I look up it is to gaze at the white marble angel standing above me.  She herself is far from complete, mostly rough hewn rock, transmuted into curving abstract shapes and then transfigured into the perfection of her attentive and careworn face.

It’s her hands that hold my attention, though.  A creation in rough stone herself, she is caught in a moment of creating as well, as her hands lovingly and painstakingly form the smiling face of a boy scarcely grown to young manhood, never to be complete.

Or perhaps he is.  Perhaps Wade Edwards is complete.  Perhaps his death at 16 is the precise definition of completion . . . chaired through the marketplace, laurels unwithered, record eternally uncut.

If so, then it is we, the living, who are forever becoming.  We either know it, or we don’t.  If we do, we say perhaps and speak in alternatives and conditionals.  If we finally see incompleteness as possibility, when we finally comprehend living as endless becoming, then we give thanks. And start another invention.

For further reading: “To an Athlete Dying Young” by A. E. Housman

2 Responses to Forever Becoming: A Meditation